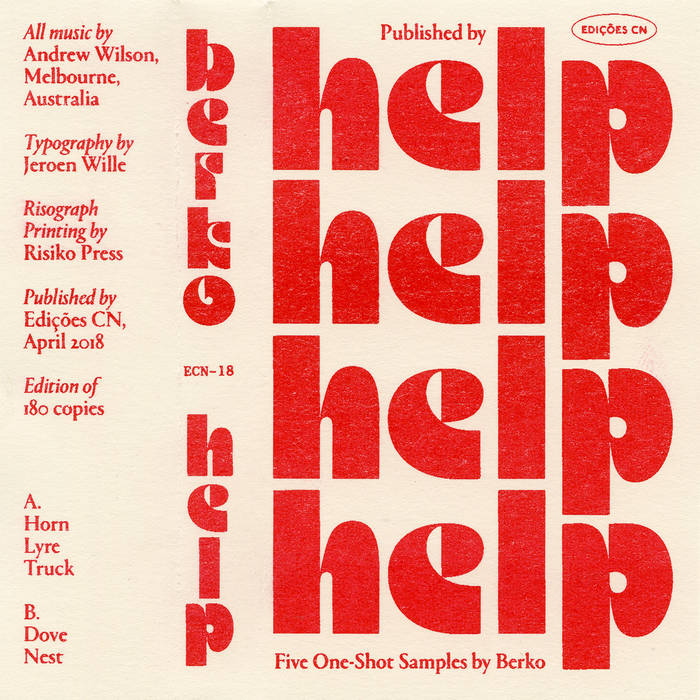 Released by Edições CN, A private press for related artists, and the archives of Lieven Martens Moana / Dolphins Into The Future.
edicoescn.be

“ I met Andrew Wilson, (aka Berko, Art Wilson, Andras), a few months ago in Tokyo where we were both to perform on a sort of Balearic Ambient variety show in the heart of Shibuya. At some point Andrew was telling me about his interest in Youtube videos of truck accidents, animals attacking people and bloopers. With creating one-shot samples of these sort of “popular fringe finds” he started creating long-form drones of harmonic beauty, without being overtly and subjectively emotional. Wilson presented some of these pieces on said night in Tokyo, in a dandyesque manner all dressed in white, sitting behind a small restaurant table. "Table for one, please … "

This cassette collects some of these stills, or better said freeze frames. Freeze frames that become almost landscapes that one can enter or not, listen closely to or use as mere background ambience. Wilson went in and untied the knot, yet while investigating the situation, posing more questions. This is as open-ended a release can get, so captiously simple.” - Lieven Martens Moana

"chuck a berko: display an outburst of anger, become angry. In Australian English berko means ‘mad, crazy, or angry’, and is an alteration of berserk. ‘Real narkie bastard. Ignore you for months, then chuck a berko over nothin’." (R. Sims, The Shadow Maker, 2007)

Andrew Wilson lives and works in Melbourne, Australia. Over the past few years he’s been releasing records on various labels - Growing Bin (GER), Mexican Summer (US) and on his own imprint Punp (AU). He was recently on tour in Asia and Northern America.

Bandcamp Daily  your guide to the world of Bandcamp

Benji B talks about his new compilation ‘Deviation Classics’